READERS' COMMENTS
Joan Bello?, US: "I am quite sure that I have just finished reading what should be recognized as an all time classic. Alun Buffry is a master storyteller. All About My Hat kept me spellbound from the first page. This is a precise recounting of true adventure that every hippy-minded person will be in awe of regardless of age. Thankfully, Buffry has found a delightfully unique literary vehicle that completely disposes of the usual ego distraction of so many biographical accounts. It is effortless reading, nothing superfluous, no fillers, with an ease of language and a precision that is admirable. My Hat is a constant reminder of the camaraderie shared among all cannabis supporters around the world. Bravo!!"
Winston M, Surrey: "Great read and so much interesting found it hard to put down."
Kevin T, Norfolk: "A Brilliant book once i started it i could NOT put it down i would recommend others to read it."
Roger H, Suffolk: "Good Grief!"
Ann C, Norwich: "This is a fascinatng book packed with stories about adventures on the "Hippy Trail" in all its reality. It was harsh with extreme discomfort, heat and dust and sometimes illness. It took strength and endurance ...but then... the rewards were a rich awareness of other cultures and beliefs. "I recommend it warmly.and did I mention, it is so funny!"
Roger W E, Swansea: "My Hat is becoming an independent friend, as I read on - he/she/it is competing with you! Roger WE"
Chris P, Essex: "Awesome read fella, most enjoyable."
Ian L, Norfolk: "Liked it a lot, very entertaining, definitely a good read, well done Alun."
Frank K, W Sussex: "Loved the book Alun and have shown friends, also travellers with a Hippie hat. Great days to remember for you I bet. I like the way you laid out the text too, great read."
Mark S, Norfolk: "Loving the book."
Melissa D, Italy "I really enjoyed this book..... but I have to admit I skipped some of the travel book descriptions. My favourite part is..... No, I won't spoil it for you!
Simon B, Norwich: "You were lucky to survive - loved the book."
Marion G, Suffolk: "Marion Gaze An easy enjoyable read. It took me right back to those times of footloose carefree travel and spontaneous adventure....usually ending in illness or loss of ones money! Though i was part of the start of the journey, Alun's Hat remembers a lot more than me, which is why there will not be a book about my overland trip to India a year or so later..."

INTRODUCTION
Let me introduce myself, I am called Myhat.
I am quite an old hat. I was made decades ago. I had been passed many times to a few heads, yet had seldom found one that I felt really comfortable on.
About 40 years ago, everything changed. I found myself upon a head that I had a close affinity with and I found myself seeing, hearing, smelling much through this young man, Al - and even picking up on his emotions and thoughts.
I was lost then for several years, stored in a cupboard until, once again, I found myself on Al's head and now I can tell my tales.
Al and I spent some nine months together on our first trip, visiting many big cities and several small villages, in eight countries, all different, all new to myself and my new head – an adventure of a lifetime.
I had sat on Al's head and witnessed all sorts of strange places and events until we had travelled to India and then to the UK.
When Al arrived back in the UK, he was quite ill, having suffered from a problem called Hepatitis and also dysentery. Al went to his parent's house in Wales and then to hospital. But whilst he was in that hospital, I was never on his head after he had arrived, and ended up in a box in a storage cupboard.
I didn't know what was happening. Why was Al leaving me? How long was I to be here? What would become of me now? Would I get a new head? Would I get more adventures? Would I be treasured or neglected?
Then one day, Al took me out of my box and put me back on his head.
That is how it came that I found myself back on Al's head. I have been on and off Al's head for about forty years and now I can tell my tales. Al had done a lot of travelling over those forty years.
I had always been able to understand any language spoken and understood by whatever head I was placed on - but never been able to utter anything myself – until now! I have discovered that I can help Al remember the places we had experienced together and I somehow I managed to place the idea of writing my tale for me. Anyway, that idea came upon Al and here he is, writing this for me!
As well as understanding the thoughts, memories and feelings of my head – I felt as he felt - I have been able to see through the eyes, hear through the ears and even taste through the mouth and tongue of my head – Al – and over the days developed a strange connection so that so long as Al was nearby, I could watch what was going on around him – even when not on his head!
I watched, I listened and I remembered – and that is how I come to write this story through a head called Al. 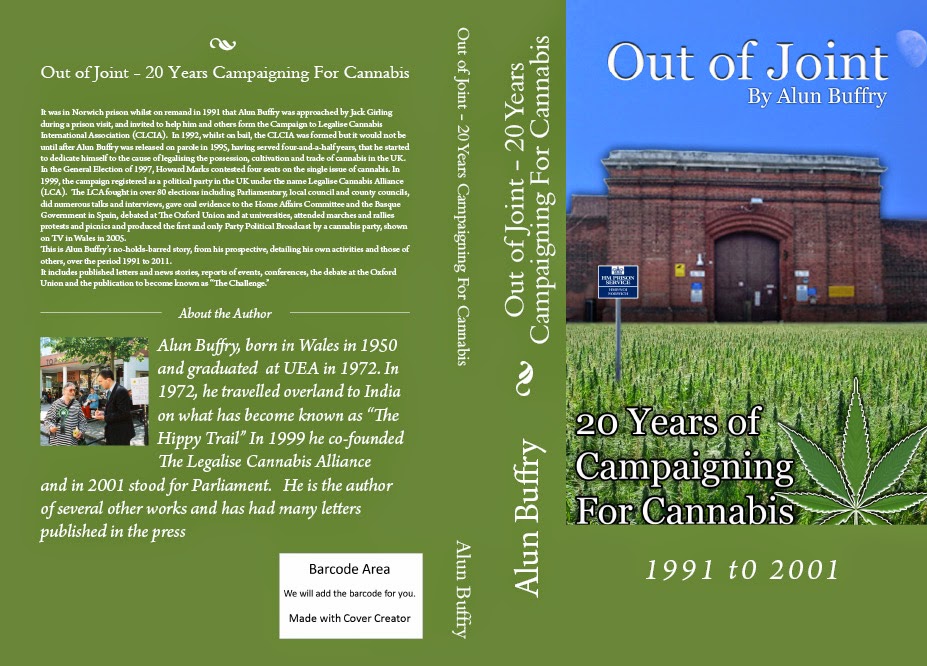 It was in Norwich prison whilst on remand in 1991 that Alun Buffry was approached by Jack Girling during a prison visit, and invited to help him and others form the Campaign to Legalise Cannabis International Association (CLCIA).In 1992, whilst on bail, the CLCIA was formed but it would not be until after Alun Buffry was released on parole in 1995, having served four-and-a-half years, that he started to dedicate himself to the cause of legalising the possession, cultivation and trade of cannabis in the UK. In the General Election of 1997, Howard Marks contested four seats on the single issue of cannabis. In 1999, the campaign registered as a political party in the UK under the name Legalise Cannabis Alliance (LCA).The LCA fought in over 80 elections including Parliamentary, local council and county councils, did numerous talks and interviews, gave oral evidence to the Home Affairs Committee and the Basque Government in Spain, debated at The Oxford Union and at universities, attended marches and rallies protests and picnics and produced the first and only Party Political Broadcast by a cannabis party, shown on TV in Wales in 2005. This is Alun Buffry's no-holds-barred story, from his prospective, detailing his own activities and those of others, over the period 1991 to 2011.