Is This Why They Bust Cannabis Growers

Every day we read in our papers that another cannabis growing operation has been closed down - not just the large professional and profiteering growers but also those run by people in dire medical need of the relief from much of their pain and suffering.

Cannabis the plant is now well known and widely accepted as having medicinal and pain-easing properties, used effectively and safely by many tens of thousands of sufferers of a wide-range of ailments from Multiple Sclerosis to Epilepsy, pain to loss of appetite or sleeplessness, depression and even cancers.

"It is so common a plant, and so well known by almost every inhabitant of this kingdom, that a description of it would be altogether superfluous." 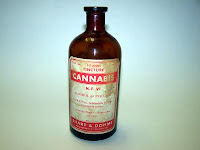 That was until 1971, when the UK, as lacky to the UN Single Drugs Convention of 1961, banned the sale of the medicine (then available as a tincture", claiming that cannabis had no medicinal value and was being misuses as a "recreational drug".

Since then the Government has fought tooth and nail to stop people from gaining medical benefits and pain relief from the plant they can easily and cheaply grow at home - despite literally thousands of testimonials and acceptance in countries such as the USA,  Canada, The Netherlands, Italy, Germany,and Israel.

Then, a few years ago, along comes a Pharmaceutical giant to produce extracts and test them - now they produce "Sativex", an alcohol and peppermint spray containing exactly the same beneficial chemicals (THC and CBD) found in the plant itself - and of course charging extortionate fees and making huge profits for their shareholders - at public expense.

It seems to me that the UK taxpayer loses out all round for they must pay both the NHS bill for the prescription medicine and the cost of seeking out and prosecuting the growers.

So one is forced to ask - is the potential profits for the same people that sell us highly priced and dangerous fuels to heat our homes and run our cars, the toxic chemicals dumped as side-products of the environmentally-damaging plastics and other synthetics the reason for the prohibition of the possession or cultivation of the plant  - described by one of the world's foremost experts on cannabis, Professor Lester Grinspoon of Harvard University, as "remarkably safe".

It may not be coincidental that the cannabis plant, also know as hemp, can also enable production of safe and cheap alternative fuels, plastics and even foodstuff.

see How cannabis was criminalised.