Taken from "Out of Joint - 20 Years Campaigning For Cannabis"

Lezley Gibson, who suffered from Multiple Sclerosis, the wife of Mark Gibson, had been busted for using cannabis in 1996 and had been found not guilty and vowed to continue using cannabis. 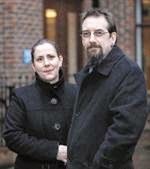 Every time Lezley Gibson lights up she's breaking the law.  She's a vital statistic in the growing campaign to legalise cannabis for therapeutic reasons.  Here Lezley explains to reporter KELLY EVE why she'll never give up the ganja.
LEZLEY Gibson was diagnosed with multiple sclerosis 14 years ago and told she would be in a wheelchair within five years.
Today, without a wheelchair or crutch in sight, 33-year-old Lezley believes her healthy condition is down to the success of her own prescribed medicine - cannabis.
Lezley has been smoking cannabis for the last 10 years and smokes up to three joints a day.
She insists she does not get stoned, but the drug, which has been illegal since 1971, relieves her symptoms although there is no medical evidence to prove this.

She said: "Without a doubt I think it is cannabis that has kept me well.
"I am not prepared to stop smoking cannabis so someone can see me being ill.
"Before the cannabis I used to have very severe attacks, but after I started smoking it I have had at worst a mild attack - no loss of speech, sight or use of a limb."
Lezley has no need for the drugs doctors could prescribe her and she does not visit specialists or GPs to monitor her condition.
She had previously been prescribed steroids and ballooned to 14 stones after her release from hospital in 1984.
She said: "I never go to the doctors now or to my specialist.  I smoke my pot.  I do not bother anybody.
"Most people can go to their doctors and get something, but I can't.
"I feel the Government are depriving me of my medicinal drugs so they should be held responsible somewhere along the line."
Originally from Carlisle, Lezley now lives in Alston with her husband Mark.  Her condition and treatment are common knowledge in the town.
Lezley said: "People are being a lot more open now.  Two old ladies in my local post office in Alston even said we were doing well."
But the couple live in constant fear of being raided by the police and have been in trouble in the past.

Lezley said: "About eight years ago I got a two-year conditional discharge from Carlisle Crown Court.  My husband has been in trouble because of me as well.
"I never even had detention at school.  When I was arrested I was so scared.
"I could not believe it.  I thought it was a mistake.  Why did they want to arrest me? I wasn't doing anything to anyone."
Lezley was told in February 1984 at the age of 20 that she had multiple sclerosis.
Doctors advised her to shelve plans she had made to open her own hair salon, Blitz, on Dalston Road in Carlisle.
But with her family's support she opened the salon and successfully sold it a few years later.

Lezley said: "The symptoms started off with pins and needles for six months.  Three months later, I was completely paralysed down the right side of my body.  It went on for about three years.
"Then I read something about the benefits of cannabis and I found out as much as I could before I started smoking it."
Lezley is now helping raise the profile of Therapeutic Help from cannabis, the campaign group set up with ex-mayor and former heroin addict Colin Paisley.

Lezley's was one of those terrible cases where the CPS seemed to go all-out to intensify her pain and derive her of her medicine.

MS SUFFERER TO BE PROSECUTED OVER CANNABIS

A CUMBRIAN multiple sclerosis has been told she will be prosecuted over an allegation that she possessed cannabis.
Lezley Gibson, 35, is a secretary for former mayor Colin Paisley, who is standing in the Kensington and Chelsea by-election as a candidate for the Legalise Cannabis Alliance.  The prosecution decision comes two months after police raided Mrs Gibson's home in Alston and allegedly seized a quantity of cannabis.
Mr Paisley said the prosecution was a waste of public money.
Though declining to comment on Mrs Gibson's case specifically, he hit out at the policy of prosecuting people who clearly use cannabis for medicinal reasons, saying: "MS sufferers surely have enough to cope with without being victimised for using a herb to relieve their symptoms.
"Researchers have now isolated the chemical that can alleviate symptoms for people with conditions such as MS and glaucoma, so there's no doubt over why they use cannabis.

"People are still being arrested for using it to relieve their symptoms but the public is beginning to recognise the folly of it, as was shown by the recent case of Paul Davis, who was acquitted because he could prove his condition."
Mr Paisley called on the Home Office to issue urgent guidelines to Crown Prosecution Service lawyers, instructing them not to prosecute those who are using cannabis as a medicine.
He warned that Mrs Gibson's court appearance in Penrith next month is likely to spark public protest from people who support her cause.
Mr Paisley added: "Before the Stephen Boyd Trust closed down, I was getting calls from lots of people in this situation.  In some cases from people in a worse situation.
"To treat sick people in this way is abhorrent and it's also a pointless waste of public money."
Since police raided her home, Mrs Gibson, who has in the past criticised the way some MS sufferers are treated like "criminals" for using cannabis to relieve symptoms, has been forced to use prescribed valium.
A mother and qualified hairdresser, she has claimed that cannabis has in the past dramatically halted the progress of her illness.
The Crown Prosecution Service confirmed that they would be taking the matter to court.

But in 2002, to the annoyance of the cops, she was cleared again at Carlisle Crown Court:

Lezley Gibson says she smokes five joints a day A multiple sclerosis sufferer was cleared of possessing cannabis after telling a court that she needed the drug to relieve the symptoms of the muscle-wasting disease.  Lezley Gibson had denied one charge of possessing eight grammes of the class-B drug with a street value of around Pounds 40 on the grounds that she needed it for medical reasons.  During the four-day trial the jury heard police raided the 36-year-old's home in Alston, Cumbria, in August 1999, where they found cannabis.  The prosecution at Carlisle Crown Court argued that the mother-of-one could not use the defence of necessity because she would not be at risk of death or serious injury from her condition if she did not smoke cannabis.  Supporters cheer Graham Knowles, prosecuting, told Mrs Gibson: "Your preference is to break the law with no need to do so by buying cannabis from drug dealers because you greatly value the relief that you sincerely believe you get from cannabis.  "It wasn't necessary at any time for you to use cannabis," he said.  Mrs Gibson told the court she started smoking cannabis 12 years ago - three years after she was diagnosed with multiple sclerosis.  She had tried steroids, valium, hypnotherapy and acupuncture but none of them helped relieve the symptoms, which include spasms, dizziness and loss of feeling, as well as cannabis, she said.  Mrs Gibson added that she smoked up to five joints a day because it enabled her to have a more normal life.  She said:" It's the best chance of feeling like everybody else.  "I would use paint stripper if I thought it would make me well."  Mrs Gibson wept and her supporters cheered as she was found not guilty after an hour and a half of deliberations by the jury of seven women and five men.  Outside court, with her husband Mark, Mrs Gibson vowed to continue smoking cannabis and called for a change in the law.  She said: "I will continue to campaign for everybody else.   There are hundreds of people like me out there."  Mrs Gibson said she intended to throw a party to celebrate the verdict.  She said: "No one in my position should have to be dragged through the courts like this but I am glad it is all over.  "I feel brilliant," she concluded.
I must say that Lezley is amongst the strongest and bravest of the cannabis campaigners that I met.

Lezley and Mark did not stop there, but went on to found THC4MS and help run, then take over, the cannabis-chocolate bars being produced by Biz Ivol.

They did not keep it secret, but let the world know what they were doing and how many people were being helped.  The chocolate bars were free and sent through the post.

CANNABIS chocolate bars made in the North are being exported around the world, it was revealed yesterday.
Lezley and Mark Gibson set up a non-profit-making organisation to supply the controversial confectionery to multiple sclerosis - MS - sufferers, who use it to ease their symptoms.
And the couple have now decided to expose themselves as international suppliers of the cannabis-laced bars.

Mark said: "This is far too important to ignore.  People are suffering and we can't turn them away when they come begging for help. "
The bars are produced at a secret location in Cumbria by crumbling cannabis into melted chocolate before it is poured into a mould.
The drug makes up two per cent of each 24-piece bar.
"The wrappers on them read "150g Milk Medicinal Cannabis Chocolate, For Patients Use Only!" and warn "Keep out Of Reach Of Children."
A bar made from organic chocolate suitable for vegetarians and vegans is also available.
The products are free but are only supplied to people who can produce a doctor's note to prove they suffer from MS.

The Gibsons, from Alston, Cumbria, run a group called Therapeutic Help From Cannabis for Multiple Sclerosis, THC4MS.
It now supplies 160 sufferers, including people in Italy, Spain and Denmark, and has recently received requests from the USA. `
Lezley, an MS sufferer, has been arrested previously over her use of cannabis.
Now the couple are risking another run-in with the police especially after admitting sending the drug overseas.
Mark said: "It is not a matter of choice ... we feel we have to help people who are desperately in need of cannabis.
"It is for people who have run out of their supply and need to alleviate the symptoms quickly.

"Recent Government papers prove that cannabis reduces the effects of MS."
The Gibsons accept donations of drugs and stamps to help with the service, which has grown quickly through word of mouth, referrals from specialists, the MS Society and visitors to its website.
Mark said: "In 12 months there have been in excess of 600 deliveries across the UK and Europe.
"We've had donations from what we call the 'growing community'.  One guy gives between £700 and £1200 (UK pounds) every few months."
Home secretary David Blunkett is expected to rubber-stamp plans to downgrade cannabis from a Class B drug to a Class C in a statement to the House of Commons on Wednesday