"Myhat in Egypt: Through the Eyes of a God" by Alun Buffry

INTRODUCTION BY MYHAT Before I tell you my incredible story of my journeys to Egypt with Ed, I must explain that I am a hat! My first memories were from the early 1970's, although I know I am older than that. In those days, I spent a great amount of time hanging on a hook in a barber's shop in Thessaloniki in Greece and from there I had a very limited experience and concept of the world. The barber's name was Constantinos and sometimes he used to take me off my hook and put me on his head; then I could experience more. Let me tell you a little about myself. You see I am no ordinary hat. I am able to see, hear, smell and even taste through the senses of the person wearing me. In fact, I can often pick up on their thoughts, memories, dreams and even fears. But, from that hook, I mostly witnessed conversations between Constantinos and his customers, whilst he cut their hair or shaved their beards, which for me seemed to be a strange thing to do at that time. Their talk was about the weather, the people that ran their lives and a game called football. Constantinos used to say to his customers some words I always remembered and heeded: watch, listen and remember! That is how I came to write my books. It was on a sunny day in early 1972 that my life was to change drastically and mostly for the better, for on that day whilst Constantinos was standing in his doorway, there being no customers, and with me on his head, we spotted a small group of young people walking down the dusty street. Constantinos called over a young man and presented me to him, saying "You have no hat. Here, take Myhat." That is how I come to know my name as Myhat as before that I was called Kapelomou. My new head was called "Al". Al was travelling eastwards with his small group of friends and eastwards we went, through countries called Turkey, Syria, Iraq, Iran, Afghanistan, Pakistan and India. Before that all I knew as my world was the barber's shop and the street outside. Now I was travelling the world. That is my other story: 'All About Myhat: The Hippy Trail 1972'. In 1989, I found myself upon the head of Ed, after Al left me behind one day, and I travelled with Ed for over twenty years until, one day, he gave me back to Al. When Al started wearing me more often again, I was able to somehow get through to him and write my accounts of our times together in 1972 and my times in Egypt with Ed and Ana. That is how I came to write this history. It took several years of trying before I managed to plant the idea of writing books into Al's head and even as I write this today, he seems unaware that I am, in fact, a sentient being myself. Al thinks it was all his idea! Most disappointing, yet even when I gave him the idea that I, Myhat, was the true author, when he mentioned it to his friends they seemed to think he was crazy! The main thing of course is that I managed to get my story published. One day, in 1989, I met Ed. Al had left me at Ed's house and Ed started wearing me a lot. Ed and Ana and myself visited Egypt in 1989, 1990 and again in 2010 and this is the incredible tale of those journeys and what happened to us, on our travels through space and time. In ancient Egypt the name Ana name meant Goddess. I did spend time also on Ana's head too. By 1989, Ana had studied many languages. By 2010 she could speak Arabic and read some Hieroglyphs. It seems strange to me that almost every country we visited had its own languages and often its own religions, politics and lifestyles; people had their own individual dreams and fears and even their own ideas and beliefs about what would happen after their bodies died and were disposed of in their various ways. I often wonder what will happen to me too. For me, my life has meant being passed round various heads I have experienced much more than anyone, I think, could anticipate. Now I know that I am a God, much more than a hat, for I have seen the world through the eyes of a God. Let me tell you how that came to be. 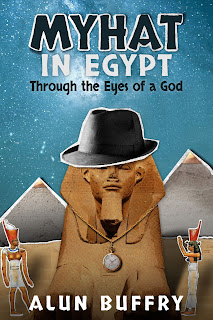 Youssef showed them a rope ladder and how to attach it to pegs in the ground by the tunnel entrance. He told them again to be careful. He said that when they got back out, they should put the rope ladder back and cover the entrance with the door. Then they should phone him and go back to the hotel. He would hide the entrance again later. Ed climbed through the hole in the ground and started to climb down the ladder. It was only a few steps before he knocked me off his head and I went falling down into the darkness. Oh how I wished he'd get some sort of strap to keep me on his head at times like this. Before I knew it, I was alone at the bottom of this horrible place. Ed and Ana may well have been in places like this before, on rope ladders, but I had never enjoyed it when I was there. I remembered the time Al, my previous head, had climbed up the side of a ship that was bobbing up and down in the Mediterranean, the day he had left Antalya in Turkey, on his way, at that time, to Beirut. That was back in 1972. I was on his head, the wind threatening to blow me off into the sea, as Al had climbed from a small fishing boat and ascended the ladder. Al could not swim and, as far as I know, neither can I. Yet he obviously made it to the top. I also remembered Ed descending a ladder near the Great Pyramid twenty years earlier, down into the darkness, not so many steps, and turning back upwards, never to reach the bottom where the tomb was supposed to be. But at that time he had no good source of light, now he had a torch. I had hope.

My hope paid off, for it wasn't long before I sensed Ed was still climbing down the ladder and … standing on me! I was not happy about that, I can tell you. He should learn to be more careful! As he picked me up, dusted me off and put me back on his head, I realised, once again, that Ed was more concerned about Ana than Myhat. Now, with Ana besides him, they headed down the underground corridor. The tunnels were not high enough to walk upright. They did not have the feel of real ancient tunnels, being roughly hewn with wooden roof supports and a lot of rubble with trash on the ground. They were not level either. Of course they were completely dark without the torches. Ed drew arrows on the wall, pointing back the way we had come, as we passed more rough-hewn stone corridors on either side. Ed thought they may have led to tomb chambers, but he and Ana agreed to see how far the main corridor would go, first, seeing the side chambers on the way back. At one point they almost missed a tunnel which went off from a small chamber that they arrived in. There were inscriptions on the walls, some looking very ancient and some with names and modern dates. It was as they looked back behind them that they saw two tunnels going, seemingly, in the same direction. Ed was keen to mark the correct passageway to take on their return. He wondered where the other tunnel would lead but decided to “check that out later” as he said to Ana. They continued along the main corridor until they reached another chamber which was blocked off on all sides; the way they had come was the only way in and out of this chamber. It was blocked by what looked like a large bolder, put there almost deliberately, thought Ed, and on the bolder was an inscription. As the duo shone their torches on the inscription, Ana said that she would try to read what it said. “Something about danger of death from what has gone before... that the great must rise towards the skies but only the Just will prevail. This is Anubis, the jackal-headed god of the dead,” she said. “Look there is Ra, shining upon the king.” “There's not much else here,” said Ed; “let's head back and check out the side-rooms and corridors. We haven't been here even an hour yet,” I guess. “OK,” said Ana, “but first can we just turn off the torches and sit for a while, see what it feels like. I think that inscription could be thousands of years old, judging by the style.”
Posted by Alun Buffry