A Short History of Boris at Oxford University

"Johnson’s Oxford days are now usually mentioned in connection with his membership of the hard-drinking, posh and sometimes destructive Bullingdon Club, but in fact he was a vessel of focused ambition. Arriving in Oxford from Eton in 1983, he had three aims, writes Sonia Purnell in Just Boris: to get a First-class degree, find a wife and become Union president. That post was “the first step to being prime minister”, said the 1980s Tory politician Michael Heseltine. At speakers’ dinners, a 20-year-old Union president would find himself or herself sitting next to cabinet ministers and other useful contacts.

"Most students arrived in Oxford barely knowing the Union existed, but Johnson possessed the savvy of his class: he had run Eton’s debating society, and his father Stanley had come to Oxford in 1959 intending to become Union president. Stanley had failed but Boris was a star. Simon Veksner, who followed Johnson from their house at Eton to the Union, tells me: “Boris’s charisma even then was off the charts, you couldn’t measure it: so funny, warm, charming, self-deprecating. You put on a funny act, based on The Beano and PG Wodehouse. It works, and then that is who you are.”

"Johnson also came equipped with the peculiarly intimate network that an upper-class boarding school confers. Ordinary schoolchildren spend eight hours a day with their classmates but boarders live together, and often have inner-class family connections going back generations. Johnson arrived in Oxford knowing dozens of people, whereas some state-school kids knew precisely nobody.

"He didn’t let his degree — Classics — interfere with his Union ambitions. In 1980s Oxford, studying was almost optional. A common workload for arts students was one essay a week, often penned during an overnight panic, then typically read aloud to one’s tutor. When I reread my old essays while revising for finals, they were so pathetic that I wanted to write to my tutors to apologise.

"Michael Gove, a Scottish fresher in 1985, told Johnson’s biographer Andrew Gimson: “The first time I saw him was in the Union bar . . . He seemed like a kindly, Oxford character, but he was really there like a great basking shark waiting for freshers to swim towards him.” Gove told Gimson: “I was Boris’s stooge. I became a votary of the Boris cult.”

In an essay for The Oxford Myth (1988), a book edited by his sister Rachel, Johnson advised aspiring student politicians to assemble “a disciplined and deluded collection of stooges” to get out the vote. “Lonely girls from the women’s colleges” who “back their largely male candidates with a porky decisiveness” were particularly useful, he wrote. “For these young women, machine politics offers human friction and warmth.” Reading this, you realise why almost all Union presidents who become Tory politicians are men. (Thatcher’s domain was OUCA, where she was president in 1946.)

”Tory MPs now backing Johnson’s candidacy for leader may find the essay interesting. Gove, who wore a kilt in debates, was such a gifted speaker that he could even make a compelling case to a student audience against free choice in sexual behaviour. He was unusually ideological by Union standards, a Thatcherite meritocrat. As Union president in 1988, he wrote a paean to elitism in the Union’s house magazine: “I cannot overemphasise what elitism is not. It is not about back-slapping cliques, reactionary chic or Old Etonian egos. It is a spirit of unashamed glamour, excitement and competition . . . We are all here, part of an elite. It is our duty to bear that in mind.”

"Amid all this Oxford politicking, there was one notable absentee: David Cameron. He got his First, and amused himself in posh dining clubs, but felt no need to do anything so vulgar as burnish his CV with student politics. After all, he too was distantly related to the Queen, his father chaired the establishment club White’s, and his cousin Ferdinand Mount headed Thatcher’s Policy Unit. Cameron went straight from Oxford to the Conservative Party’s research department, where he later encountered his successor in the Bullingdon and future chancellor, George Osborne.

"Rees-Mogg arrived at Oxford at the same time as me in 1988. Almost immediately, Cherwell nominated him (as it had Gove before) for the traditional title of “Pushy Fresher”. The paper printed a photograph of him speechifying in his suit, above the caption, “What more need we say?”

"Studying the picture, you realise: Rees-Mogg hasn’t changed. Like Johnson and Gove, he even has the same hairstyle today. They were almost fully formed at 18. School had given them the confidence, articulacy and know-how to bestride Oxford. They also already knew what they wanted to be when they grew up. If most students back then had had to guess who would be ruling Britain in 2019, they would probably have named Johnson, Gove and Rees-Mogg." 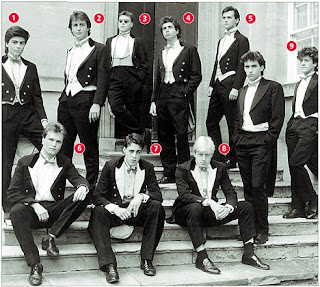 (1) the Hon. Edward Sebastian Grigg, the heir to Baron Altrincham of Tormarton and current chairman of Credit Suisse (UK)

(5) Matthew Benson, the heir to the Earldom of Wemyss and March

(6) Sebastian James, the son of Lord Northbourne, a major landowner in Kent

(7) Jonathan Ford, the-then president of the club, a banker with Morgan Grenfell 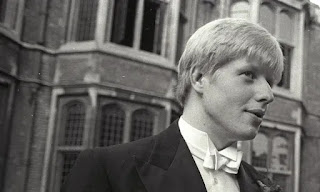 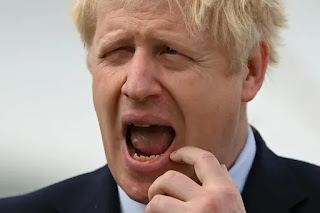 Email ThisBlogThis!Share to TwitterShare to FacebookShare to Pinterest
Labels: Rees-Mogg