I first heard of Don in 1996 when I he defending the use of cannabis by his wife, Jackie, who was very ill. Soon after that I made contact. Don was dedicated to the cause of human rights and justice for all, focussing on cannabis. Don was one of the earliest members of the LCA, a political party focussed on cannabis; he served as Press Officer for years. He contested local council elections for the LCA in Braintree and, in 2005, the general election in Norwich South against then home secretary Charles Clarke. Don spoke at every LCA conference and attended almost every demonstration that he could. Don was steadfast, loyal and reliable, of good humour and a wise man of many words and little or no fear. He was a great inspiration. My fondest memory is of travelling from Norwich to Orkney to visit Biz Ivol on the day of her court case in 2003. I will miss him greatly. 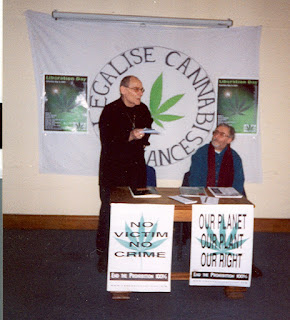