So-called "legal drugs" such as alcohol and tobacco are only really" legal" in a limited way.

It is also important to realise that it is not the drugs themselves, but the act of possession, production and supply of some drugs that is illegal for some people!

Although wishing to see cannabis available on prescription for ill people, I do not wish to see this as the only available source of cannabis.

For a start, such a situation may well encourage vast numbers of people to visit their doctor who does not normally often or never sees them. Legalising cannabis possession and supply in this way would increase the number of ‘sick’ people in the country, statistically, which may reflect poorly on the move. Some substances only available on prescription are illegal to possess unless obtained by prescription. Such substances are not fully legal; they are not free.

Drugs such as aspirin, which is highly dangerous, are available in a variety of outlets. Other dangerous substances are available from the corner shop (glue), garage (oils), and over the counter at chemists (cough mixture). There is no reason to limit the outlets of cannabis at all.

From The Report of the FCDA, Europe:
" The proposal of some people for 'partial' exemption from the Prohibition in order to make cannabis limitedly available only as a curative medicament, ostensibly has its origin in the emotional response of sympathetic human beings to the needs of the seriously ill or moribund patients. 'Partial' legalisation, however, on evaluation, is an impulsive idea - the reaction of the heart, not the head - and implausible on the very health grounds on which it purports to be based. To try to 'legalise' cannabis for but one of the two groups of people (that is for the already-sick) is inimically discriminatory, as it leaves the other group, who comprise the huge majority, condemned to inevitable worsening of their good health, as described, until they too fall prey to disease and early death. Those catastrophic results to health now widespread in populations, produced directly by the Prohibition of Preventative Cannabis, would be mitigated or avoided entirely by the Preventative protection of a Relegalised cultivation, trade and general availability. Complete Relegalisation of Cannabis provides the healthy population with the pleasant and safe relaxant to use both as Preventative Medicine and to reduce consumption of the malady-causing alcohol and tobacco. At the same time, relegalisation makes cannabis available to patients and the medical profession, as curative medicine of recommendation and advice, if not prescription. Thus, the aims of the 'partial' legalisation lobby are simultaneously achieved, without ignoring the equally deserving needs of those of the population whose health requirement for cannabis is as prophylaxis, or to replace partially or totally, noxious alcohol and tobacco. Certainly cannabis is effective therapeutically and curatively in a wide variety of illnesses and disorders, and if cannabis had always remained available as a recreational substance of legal choice, those cancers which are tobacco-induced could in a great many, theoretically even all, cases have been completely avoided, i.e. prevented. Those individual men and women, the Prohibitionists, who are responsible for the instigation and perpetuation of the fraudulent Prohibition, are instrumental in and culpable for premature deaths. Indeed, studies into these artificial products, i.e. 'concentrates'/THC, including sections of LaGuardia research, record diametrically oppose results from those clinical studies into natural cannabis. For example, doses of lab-THC can cause nausea and headache, two of the many adverse conditions for which the resinous herb in its natural form is renowned as cure."

Later
"Herbal cannabis in natural forms would yield little profit to the pharmaceutical corporations, whilst eliminating some, perhaps in the longer term much more, of the use of their patent drugs."

Later
"Another ludicrous prevarication proposed by pharmaceutical representatives is the irrelevant argument that each of the many, mostly commonly occurring, chemical constituents in the natural herb, be isolated and tested for their potentials before legally re-allowing cannabis for 'medical' or 'general' use, if at all."

Personally I think decriminalisation of cannabis possession without any change in law regarding production - both at home for personal use and commercially - and supply (both for free and commercially) would be a risky move.

Decriminalisation of personal possession would of course ease the burden and cost of the police, stop the arrest of innocent people and could be seen as a step in the right direction, but only if followed by other easing of the law against cultivation and supply.

It could open the doorway for many more street dealers carrying small packs of cannabis of dubious quality to supply the increase in people no longer deterred from buying, by the law.

It would do nothing to promote consumer and quality protection or enable tax on profits, point-of-sale advice and information, or discourage young people.

It would be little more than sweeping the real dirt of prohibition under the carpet.

So it appears that Maastricht are giving preference to "Germany and Belgium who are the majority of foreign customers."

Recently the Human Rights Court ruled that cities can restrict the sale of cannabis to Dutch-only because cannabis is still "illegal" to supply in The Netherlands.

Now they are taking the idea step further and banning all tourists from Coffeeshop except those from Germany and Belgium.

City authorities say the influx of tourists buying soft drugs is threatening public order and causing major traffic problems.  So, it seems that the problems with public order and traffic are being caused by people that are not Dutch, German or Belgian.

Sounds pretty dumb to me. 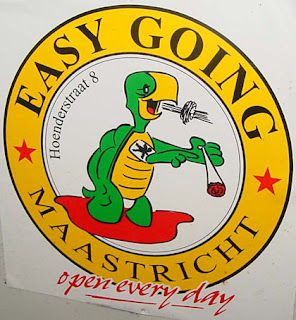 A ban on some foreign tourists has come into force in the cannabis-selling coffee shops of the Dutch border city of Maastricht.

Coffee shop owners say the ban won't work and will hit the local economy.
However, the ban does not apply to visitors from Germany and Belgium who are the majority of foreign customers.

The move comes ahead of a proposed nationwide crackdown being discussed in the Dutch parliament.

The BBC's Anna Holligan says the ban is being seen as a test case that could be implemented in other Dutch towns and cities.

There are about 700 coffee shops in the Netherlands. The cultivation and sale of soft drugs through them is decriminalised although not legal.

An estimated 6,000 people visit Maastricht's coffee shops every day - most making the quick trip across the border from Belgium and Germany.

But from Saturday, anyone who doesn't hold a Dutch, Belgian or German passport will be told to leave.

Hi-tech security scanners have been set up to check passports and ID cards, and police will carry out random checks.

But critics of the policy say the ban contravenes EU policies of equality and the freedom of movement.

Marc Josemans, chairman of the Association of Official Coffee Shops Maastricht (VOCM), said the ban would do more harm than good.

"All these clients who are banned from the Dutch coffee shops... have to return to the illegal circuit in their own country, therefore it will become a bigger problem and cause more criminality in those countries," he told Reuters.

The European Court of Justice ruled last December that Dutch authorities could bar foreigners from cannabis-selling coffee shops because they were combating drug tourism.