Books by Alun Buffry, on Amazon and Kindle 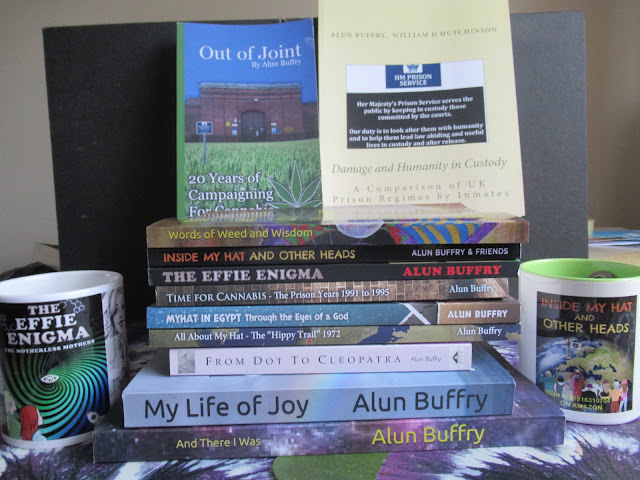 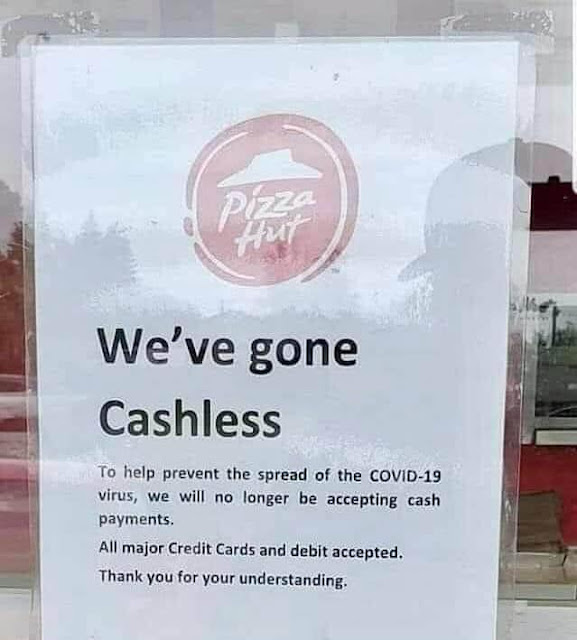 "The coronavirus pandemic has prompted retailers to ask customers to wear masks, maintain physical distancing and avoid the use of cash when possible. Despite scientific evidence indicating that currency doesn’t transmit COVID-19, there continues to be an unprecedented weariness around the use of cash altogether."  https://theconversation.com/cash-and-the-coronavirus-covid-19-is-changing-our-relationship-with-money-138774

Coronavirus will hasten the decline in the use of cash as people make a long-term switch to digital payments, experts say.

The lockdown has led to a 60% fall in the number of withdrawals from cash machines, although people are taking out bigger sums.

Payment card use has risen with online shopping, particularly for groceries.

Experts say the long-term future of cash could be at risk, before the UK is ready to cope with the change.

This could leave behind an estimated 20% of the population who rely on cash, they say.

Words of Weed and Wisdom - The Book and the T-Shirt

Hi, DON'T FORGET OUR HAPPY READERS COMPETITION - with a prize worth winning - post your selfie with the WORDS OF WEED AND WISDOM book or pics of family or freinds with the book - tag yourself in - we will move your pic to this album, then get your FB friends to like your pic in this album - the pic with most likes at end of September 28th 2020 will win the mystery prize. Authors' pics are not included in the competition but you can LIKE them anyway! 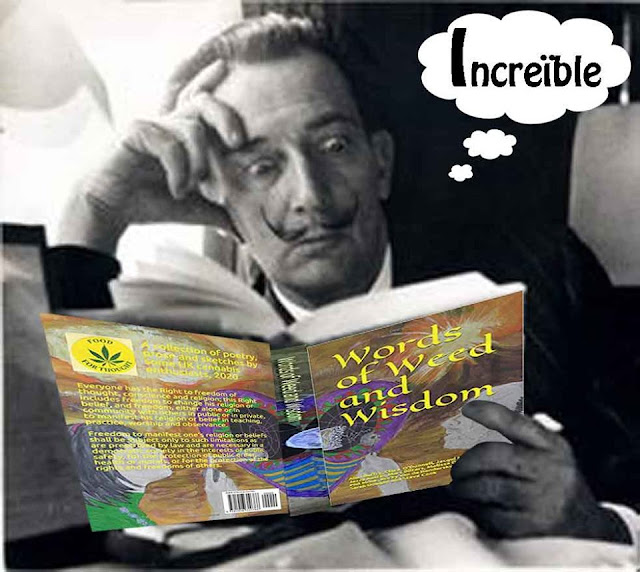 Words of Weed and Wisdom is NOW ALSO ON KINDLE

WELCOME. We hope that you will LIKE and SHARE this page, buy the book and support the cause of ending the prosecution of victimless people for the possession, cultivation and supply of cannabis - the price is set so postage is free and all profits will go to the cause; we hope that you will send us a photo of yourself, or somebody else, with the book for our "Happy Readers" album.

Words of Weed and Wisdom is an anthology of poetry, prose and sketches by some of the UK's cannabis enthuisiasts.
Available on Amazon ISBN 9781916310766 from Amazon worldwide, through bookshops or from any of the authors,
https://www.amazon.co.uk/dp/1916310761

All profits from the sale of the book and T-shirt will go towards the fight to end the unjust prosecutions of victimless growers and consumers of the cannabis plant and its products. #WTU 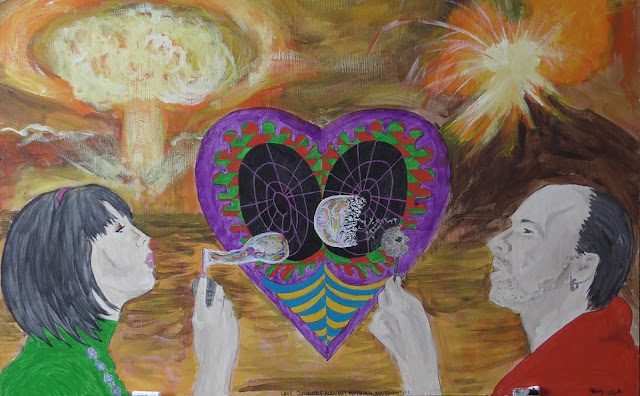 Words of Weed and Wisdom is NOW ALSO ON KINDLE

Words of Weed and Wisdom T-Shirts by Ryan Kief are available here
https://helpmehemp.uk/prod…/words-of-weed-and-wisdom-t-shirt 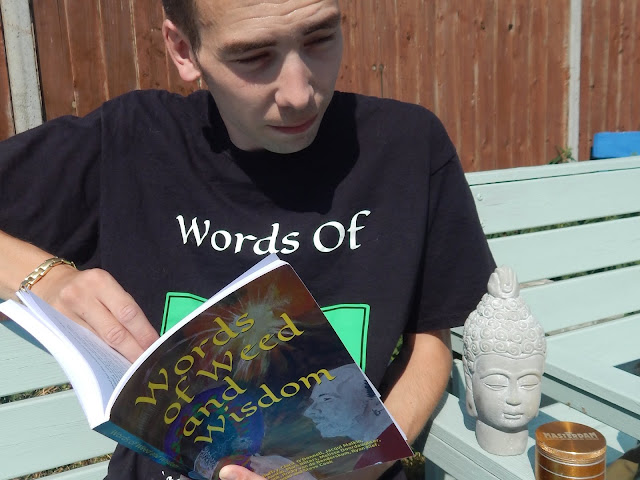 FIGHTING A UNITED NATIONS PROJECT: THE ERADICATION OF A PLANT

For many years now the United Nations has by international agreement set out to eradicate not only to put a halt to the so-called drug use of cannabis, but also to actually eradicate the hemp plant from the planet, apart, of course, from their own profitable concerns.

This, of course, is nothing entirely new.   Ever since the industrial revolutionâ there has been an elite of profiteering megalomaniacs who want to run the world, and to do that they had to create a world where the people became totally dependent on the products of industry, not agriculture.

The US Civil war was a war between the industrial and the agricultural. Huge numbers were working as slaves and when the slaves were freed they began to seek work for a pittance in the factories being set up in the victorious North. The war on hemp is down to the same greed and power struggle that was behind so many wars.

Now consider what measures you would want to take if that was part of your aim:

You would want to prevent the production of seeds / clones.

You would want to attack the farmers, limit cultivation.

You would want to prevent sale

You would want to limit production

You would need to mis-educate the public in order to get away with such a scheme.

The so-called mind-altering properties of cannabis could certainly be one way to scare the people into believing that the plant was dangerous and that it had to be banned, despite the many beneficial uses.

So is any surprise that we have witnessed such bias and deceit about the plant that even our own Government is confused as to just how dangerous it is in comparison to other substances, whilst authorising extreme force against those who choose to cultivate it.

In previous years, we have watched the following developments around the world:

In the UK, medical cannabis supply operations like THC4MS, and 'medical users' prosecuted.

There was an increased number of raids on Cannabis 'Factories'  (strange that they call them factories yet they contain plants, whereas many chemical factories are often called chemical plants.)

Cannabis was downgraded to a class C "drug", then upgraded to class B again and sentences increased

The Police are arresting cannabis growers whilst doing nothing to stop the real gangster-profiteers contaminating cannabis with grit, glass and who-knows-what yet all the Government did was warn doctors and clinics, not the users themselves.

Cannabis chemicals were rescehdules and so-called cannabis medicines supposedly were to be made available on prescriptions which have turned out to be expensive and hard-to-get.

Meanwhile Government ministers' spouses have been making fortunes through cannabis producing businesses such as GW Pharmaceuticals and British Sugar.

The issue of consumption has become so clouded that there are some cannabis activists groups focussing on 'medical cannabis' supply, playing into the hands of the pharmaceutical companies that have for decades stood against cannabis.

Many Dutch Coffeeshops and Spanish Cannabis Clubs have been closed although many continue to function withing strict limitations on siting and cutomers.

In Canada, cannabis was "legalised" although there are restrictions of strains and strengths.

Strict contracts and laws on eviction of tenants or mortgage holders who are caught growing cannabis, even with confiscation of property.

Over 300 Hemp shops in Switzerland were closed down.

Swiss hemp activist and farmer Andre Furst RIP and others arrested and imprisoned. When masked men attacked the hemp farming community, police closed down the community!

In Southern Australia, they started banning books and magazines with articles about growing cannabis, and making it a requirement that owners of hydroponics equipment explain their uses. They will be watching and closing down hydroponics shops.

In Singapore, magazines such as Weed World were banned.

In China, Malaysia, Indonesia and several Arab states, they still execute people for cannabis possession. In many countries sentences in excess of ten years in prison are given out frequently, where there is no crime other than the cannabis crime committed.

Social media networks such as Facebook have adjusted search engine results to prevent people finding cannabis related pages and groups and YouTube channels have been closed down.

Numerous petitions on the Downing Street petition site have been ignored and the only petition, with 250,000 signatures, to get to the debating stage was held in a back room with only 17 MP's attending, being clverly diverted into a 'medical cannabis' discussion, the motion then being "This House has debated ... " which was of course meaninglessly passed and the isue once again side-stepped.

The Human Rights of cannabis consumers (those in possession or cultivating for own use in their own homes) continue to be abused, a fact ignored by Judges.

Meanwhile, what have we really done in the face of this resolution by the UK and these attacks on otherwise law-abiding people and farmers?

The people seem to be swallowing the lie, hook, line and sinker. The vast majority of those who use cannabis have sat by and done nothing. In the UK alone there is said to be somewhere between 1.5 and 4 million regular cannabis users - and as many as 1 in 3 adults have tried it. It's probable that the majority of the House of Commons have at one time tried it.


Now, due to the Covid19 pandemic, street demonstrations and marched have been effectively banned.


It's a good job that those that DO feel how they do about the injustices of prohibition, for without maybe just a few dozen people there would be no active public campaign of any name.

Yet for sure, most people who now ignore the law risk their freedom and continue to ignore the law, grow, even sell, and use at their own risk of being busted. I know that those of us that choose to fight prohibition do so because of what we feel about prohibition despite all those tokers who don't.

In the future, I believe, the situation regarding cannabis will worsen both here and abroad.

Why do I think that?

Well back to my opening statement, because the United Nations has by international agreement set out to eradicate cannabis.

We will see continued attacks on growers, and them growshops, magazines and medical users who go public. And if we're not lucky enough to be growing our own and getting away with it, we will have to choose between contaminated cannabis like grit weed, and nothing.  It is just a matter of time and Government priorities.

I have seen that many of our enemies are not just the profiteers of prohibition which includes industrialists and drug dealers, as well as those employed in busting us, yet many are growers and users who seem to spend much more time attacking campaigners than in campaigning to end prohibition and many many more do nothiing.

We need to look inside our hearts and find the strength to push forward rapidly. We need to wake people up, especially the tokers.   It is not good enough to sit back and rely on a few dozen people to campaign for decriminaisation.  If nothing else, more people are needed to give money,  so that much more can be done before it's too late.

That is why I am now involved with and supporting the WTU, which seems to me to be the only campaigning group focussed on the real issue of the abuse of our Human Rights.
Posted by Alun Buffry No comments:

All ABOUT MY HAT THE HIPPY TRAIL 1972 REMAKE - VISUALISED

The Dyson DC27 is the worst vacuum cleaner I ever bought

Heavy, clumsy, noisy, inconveniuent, non-retracatble cable gets in the way, it doesn't clean corners, hard to get round furniture, i have to get down on hands and knees to pull out the hair that gets tangled round the brushes.  Not recommended at all.
Posted by Alun Buffry No comments: