So, in the wake of the recent report from the Global Commission on Drug Policy. in the face of the evidence that reveals without doubt that the policy of prohibition has failed to reduce either the use of certain drugs or the harm caused by that use (some drugs, some users), the disaster brought to society by giving the supply of most drugs to uncontrollable criminals, producers and suppliers, the outcry from experts and public, and the huge financial burden on the taxpayer ...

they simply spout the same nonsense issued twenty years ago, close their ears and say NO!!  Today this was echoed by the Government of Malta.

I have to ask WHY?


What is really behind prohibition?  Who is pulling the strings?  Who is making the profit.


Almost ten years ago the UK Government launched a study into their own drug policy through the Home Affairs Committee which recommended downgrading cannabis to a class C drug.


Although the Government followed the advice at that time, it was not long before it was reversed - on the unstable grounds that cannabis had suddenly become stronger!   But all forms of cannabis from the most potent to the very weakest, were put back to class B and the maximum sentence for possession once again increased to 5 years in prison, although, strangely, the maximum sentence for supply remained unchanged.


In their report, the Home Affairs Committee also wrote that it would take a brave politician to "legalise" cannabis and that at that stage they had not even considered it.

It is said that politicians fear losing votes if they take that step. 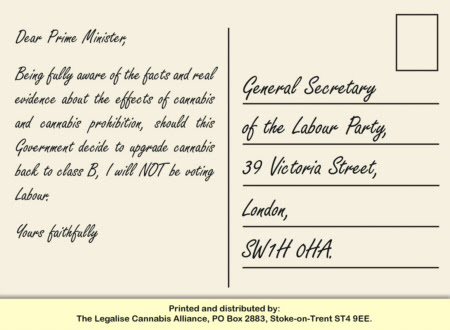 Just a couple of years ago the Legalise Cannabis Alliance (LCA) issued a post card inviting people to send it to the Labour Party.


Basically it said that if they upgraded cannabis to class B again, we would not vote for them.


Labour went ahead and lost the election - with so many voting cannabis users in the UK, who knows how much they contributed to the downfall of Labour.


Meanwhile Lib Dems claimed to have a policy towards liberalisation of cannabis cultivation and an end to prosecution for possession.  Yet since entering into Coalition with the Conservatives, themselves led by an ex-user of cannabis (and no doubt one that shred and was hence also technically guilty of supply - David Cameroon), they have seemingly dropped the policy.


So it is time to oust them all!


Cowards the lot - and we don't want our land ruled by cowards!
Posted by Alun Buffry